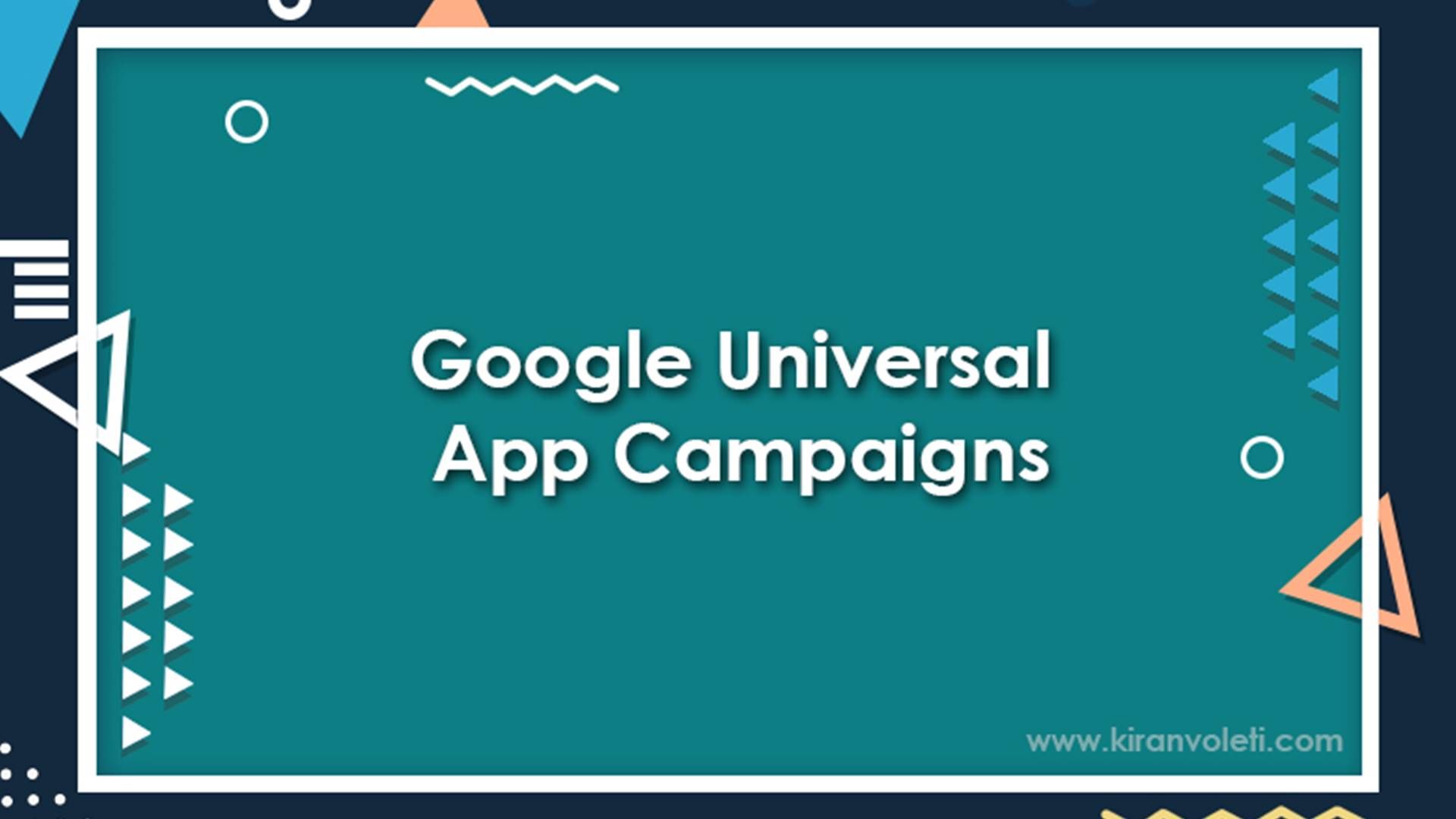 The app market has increased and got crowded across the web. The developers of the various applications are looking forward to a new change and innovative ways to explore for advertising their applications to get identified among the millions of crowded apps across the web. Google Universal App Campaigns are one of the best processes to promote apps.

Google had identified this problem and trying to get innovative with the launch of various ad products with a new tool for the developers.

These tools are providing a new way to the developers to reach their targeted audience. Now the Google was expanding its universal App Campaigns to reach iOS and Android users.

The Google Universal app campaign is a type of campaign which is designed for the developers and creators of the various applications across the web.

This application is helpful in the promotion of past app downloads and also creates a search campaign that was linked up within the form with a new set of keywords.

A separate display campaign targets the audience and the various app categories of mobile and installed apps. So, all these things can be managed with the universal app campaigns on Google.

There is no need to design personalized ads for universal app campaigns like other AdWords campaigns on Google.

The user can utilize the ad text ideas from the play store to design a variety of advertisements with different formats and the networks.

The user must need to provide a different text and can get started with the bids and budgets by choosing your language and the locations for the ads.

The universal app system will look after the different combinations of ads and test the performance, and there is no extra work needed.

There are several new options for the users as they can target based on the level of the game they have reached or the number of in-app purchases they have made. So, Google allows the clients to pay the things basing on the conversions rather than installations.

The developers can drive better ROI by linking up the targeted ads with the analytics, which yields better results. The installs of the apps are the biggest asset for Google.

In addition to the above feature, the firebase analytics feature on Google pushes the notifications. It allows you to track the purchases, which will enable the developers are allowed to create quality applications to develop the user base as well as to monetize the apps.

The mobile devices and technology have changed everything and increased the expectations in the app developing and purchasing. The customer match and the universal app campaigns are the two new products of Google. These products can help developers and app designers very well.

More than 72 percent of online buyers are choosing the best quality, relevant, and the timing of the brand’s message and love to buy those products online. Google has started a unique way to connect with the consumers for your business in different ways.

The new product customer matching can deliver the products to the audience, whether they are watching and searching something across the web on different devices. Google was building more on this feature targeting multiple accessories for the new ad innovations to deliver the most relevant information to the audience.

The customer match is the newest product, which helps you to reach the high-value consumer targeting across the Google search engine, Youtube, and as well as the Gmail. The customer match allows the uploads of addresses from your email and matches the users on Google in a safe way.

So that you can build up the campaigns as well as ads to the targeted audience and also can have reasonable control over the announcements, including the customer match ads. There is also an option for the muting and blocking of the ads from the advertisers individually.

By utilizing these customers’ matching features, the users can reach the targeted audience and new consumers across YouTube and Gmail, who are likely to get interested in your products or services.

The app promotion can also become very easy with the universal app campaigns in a scalable way across different channels.

The new app campaign tools of Google were providing significant benefits for the developers of the applications who want to market the software with specific performance and with various performance-related insights too.

Google is also ready to take a suggestion from the various developers to improve its tools. The performance reports reveal the growth of your application from your campaigns and how users are responding to your efforts in reaching them with your applications.

The performance report provides you with the best working software to estimate things. In the general reports, the users can track the links that are tagged.

Play store helps to boost up the assets accessing and speeds up the creation of a copy, which can also serve as the image and the advertising copy. Also, research territories where you want to market the application with pre-existing marketing efforts.

The universal app Campaigns and customer matching are products that had offered by Google works great for the developers and advertisers to reach their potential targets in a better way. The platform also handles the placement along with targeting in detail and helps you make the work much better.

The success of the app depends on the tractions it gains by attracting enough users. An app not only should be built but also should be marketed well to the audience. Apps don’t get discovered. The easy way for them to get discovered is to market them on social media.

Social media advertising for the app is an inexpensive way to promote the app to the target audience. This helps drive traffic to the app store and increase the downloads.

Here are the best practices for highly converting mobile app install advertising. The targeting features are those that make the mobile app ads powerful. Advertising on social media allows targeting the audience based on gender, age, location, device, and interests. Mobile app installs ads are designed to keep these target audiences in mind. While designing an ad, think about these questions. How the app is going to get attention, how the ad is going to make the audience curious about the app, how well it can convince the audience to download the app and the ad should ask the reader to download the app.

Mobile app installs ads direct the audience to download their app from Facebook mobile ads. Facebook has 1.28 billion users and the ad revenue of Facebook is growing year by year. Of the total ad revenue, mobile ad revenue accounts for more than fifty people and is still going up. Mobile app install advertising is the next big thing happening to Facebook.

The image of the install ad should be appealing to make the reader stop and read. The best image size is 1200 x 628. Use minimal designs on the images. Keep the target audience and their devices in mind. Do not use heavy text, the image should be optimized for small screens. Facebook allows choosing the audience based on demographics and so choose the image that is relevant to the target audience.

In Facebook, mobile app installs ads, customize the body and headline areas for text. The headline should not contain characters exceeding 25. The body of the ad can contain 90 characters. There are 11 Calls to action button to choose from on Facebook. These are Install now, Use App, Book Now, Download, Learn More, Watch more, Watch Video, Sign Up, Shop Now, Play Game and Listen now.

Creating a Facebook page for the app also increases awareness. Use the best image as the cover picture. The three types of app install ads that can be created on Facebook are the 1 image, Carousel Ads and Video ads.

Creating a Google Universal App campaign is very simple. Sign in to AdWords. Go to the Campaigns tab and in the drop-down menu, choose the universal app campaign. Link the app by choosing the name of the app. Enter four lines about the app. This text is used by Google in the ads. Upload images, if you have any YouTube videos, also add them. Set the language and location options if needed. Enter the CPA and budget. The ad will be eligible to appear on Google search. It will also appear in the Google Play Store, YouTube search, mobile app network AdMob, etc.

The main advantage of Google’s universal app campaign is that it is simple to set up but reaches a wider audience. There is no need for the advertiser to choose the channels for the promotion of his app separately. New marketers, marketers new to the app ad market will find the Google Universal app campaign very beneficial. This is the best way to organize and centralize the advertising.

In case you're an app designer attempting to get your app out to the masses,…

Hi, My name is Kiran. I am a Digital Marketing Strategist with an experience of over 14+ Years.

I have done consulting for 100+ businesses and helped them achieve growth via Digital Marketing since 2005.

I help Brands/Companies/Startups to grow their revenue through my Digital Marketing Strategies and Consulting.
Get In Touch
Copyright 2020 | Social Media Marketing Consultant : Kiran Voleti | All Rights Reserved
Back To Top
×